Recently, the interest of my inner child was piqued when I saw the trailer for Disney’s latest animated feature Zootopia. The movie looked kind of funny, seemed like it had an interesting enough plot, and I had nothing else to look forward to seeing in theaters until Batman V Superman came out. And after viewing the movie for myself, I can honestly say that Zootopia is proof that even outside of the Star Wars franchise and their partnership with Marvel, Disney still does not disappoint.

In a world where animals have evolved and established civilization, predators and prey coexist peacefully. Judy Hopps, an optimistic rabbit from the countryside who was bullied by a fox in her youth, moves to the big city of Zootopia with dreams of becoming the first bunny police officer. After graduating at the top of her class, she finds that she still has to earn the respect of her peers and she is assigned the least exciting tasks. On her first day, she encounters a fox con artist named Nick Wilde, who echoes the same idea that Judy was told since her youth—that you cannot escape what you are. Eventually, Judy ends up coercing Nick into a tenuous partnership to solve a missing person mystery that turns out to be part of a grander plot that could destroy the civilization that they know.

Everything in this movie is well-executed and it went well above and beyond my expectations. Every character was enjoyable and relatable, the plot kept me guessing until about halfway through (I actually thought the story was evolving into a kind of kids’ zombie movie with animals at one point, but I am just weird like that I guess), and the movie overall was pretty hilarious. There were even two scenes that had some of the other adults in the theater with me tearing up and at least one that had a few people jump in their seats. The casting choices for the film were great as well, and I would have never expected Idris Elba or Jason Bateman to lend their talents to an animated film like this one, though I was aware that Elba would be voicing Shere Khan in the upcoming The Jungle Book film. Even singer Shakira found a place in the animal metropolis. 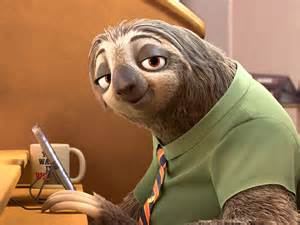 The screenwriters also deserve a tremendous amount of praise for penning the script so masterfully. I was also impressed with the Christian undertones that were presented in the movie. The representation of the lamb and the lion and the converted behavior of a former delinquent seemed like they were purposefully placed in the film, and there were a couple of hallelujahs and amens thrown in for good measure. The movie also clearly addressed prejudice in the predator versus prey theme and I thought it was very appropriate to the time we live in now, introducing such a prevalent social issue so subtly in a movie directed to a much younger audience.

This movie did so many things so well, I cannot even express my admiration for it much further without writing a book and spoiling it. It was definitely one of the best movies I’ve seen in the last few years, probably on par with some of the epic sci-fi/fantasy and comic book movies I like to indulge in. Perhaps it even raised the bar for Batman V Superman… I am glad I had nothing better to do than see this movie, and for the kid in me, this one will be one of the more memorable classics.

Marcus E.T. is a creative writer and journalist who enjoys reading manga, watching good movies, learning odd skills, traveling to new places, and playing video games when he isn’t trying to develop science fiction and fantasy stories of his own. Having had several short prose stories published, he also hopes to write comics and screenplays, but loves meeting creative people who inspire and entertain others.